Cookies help us deliver our services. By using our services, you agree to our use of cookies. Learn more
×

Published over 2 years ago

Aaaaanyways! PonySFM is still going and growing! There's a pretty big Discord Server with a lot of daily active members, a site-rewrite project and more! But let's get started, shall we?

I think I've never actually mentioned it here but... we have a Discord Server! Tons of active people on there! No matter if you have questions about SFM, resources or just want to chat, we have something for everyone on there!

If you want to join you can do so by clicking THIS link :)

Yes! PonySFM is getting an update! Ever since we started this project there were always a few specific things the site has to do that no other Content Delivery Network (CDN) had to do before, that's why PonySFM had to be written from the ground up to fit all needs of various different creators. While it's running well and so far hasn't made too many problems (kinda) there's still a need for rewriting the code which runs the site, server, conversion, ... you name it. The current code is also written in a programming language where it's increasingly hard to find people who want to continue it on, not to mention that while it is really versatile already we still would need a few new and updated functions which are simply not easily possible with the current structure.

Since I (EpicLPer) am sadly not a programmer the only other person working on this rewrite as of now is Zerix. The new site will be based upon NodeJS and Angular which gives us a way more open and new approach to tackle the specific needs PonySFM has and in addition also gives us the freedom of expanding PonySFM as needed with new functions, easier to understand website design, a completely new API and many more little behind-the-scenes things and changes! Additional to that there are a lot more people who know how to code for such a structure which, in case we ever decide to make parts of PonySFM Open Source, would enable others to either help with the project or set up their own "PonySFM CDN"! We don't have any plans for Open Sourcing it so far but who knows what will come in the future :)

Currently the rewrite is making slow but steady progress! Of course it's not a thing that can be "thrown together over night", especially since only one person is working on the code so far. If you're interested in helping out once the base of the new code is fully established feel free to contact me either on our PonySFM Discord, Twitter or via the PonySFM Contact Page!

A few people were actually wondering how PonySFM is kept alive and how it makes money. Truth is, it doesn't. I'm currently funding the site, server and everything else for it out of my own pocket since it's a passion project to deliver something to the community. I really hate ads, especially ones that are super intrusive and more annoying than anything else. The site has stayed ad-free and will stay ad-free for the foreseeable future and will still be paid by myself. I'm really fortunate and happy that everything that has been done so far for the site came from volunteers but I still make sure to show my gratitude to them in every way possible, be it by donating to them or buying them things at a con/meetup :) Without those people PonySFM, as it is now, would simply not be possible and I want to give a huge thanks to Nuke (Ex-Programmer), Zerix (current Programmer) and another person who does not want to be named (Ex-Ex-Programmer). You guys are doing something that I'm super thankful for and I wouldn't know what to do without you guys <3

If you still want to help PonySFM out somehow we do have a Patreon over at this link or, if you don't like Patreon, PayPal is also possible. Donations are optional tho as of right now, I'm financially stable enough to support the site for some time coming but people asked me to include them somewhere. :)

Final Words and a HUGE Thanks to the Community!

To be honest I have no idea how to end this blog post properly, I'm bad at writing long texts... So I just want to dedicate this last bit to you guys, the community.

Without content PonySFM and the SFM MLP community in general would be nothing. Over the years people have contributed a TON of resources to the site and if we combine the most popular resources into one big number we'd get around 150,000 downloads alone as of writing this blog post! I could give a finer number here but I'm not good at reading databases, sorry :D

The MLP SFM community is long ways away from being dead! New amazing art is being created daily, new jaw-dropping animations pop out from time to time, new models are made every few weeks... it's just awesome! A huge thanks to everyone creating art in any form for others to enjoy and I hope it will stay this way for a long time :) You guys are the ones who keep this community alive <3

Thanks for reading this blog post :) I hope you'll have a nice day still and keep being awesome!

PonySFM is approaching almost 900 SUBMITTED RESOURCES and over 780 UPLOADED FILE REVISIONS! THAT'S INSANE and we wanna thank you all for creating Source Filmmaker related pony stuff, it helps the community a lot!

Well, 900 Resources is a lot, far more than a team of 3 people could handle to keep updated. We constantly try to find popular resources, search for new revisions, upload them, keep them updated and archived that way. In some cases this even saved some models or scripts from going extinct and simply vanishing into the deep, dark nothingness despite being used by hundreds of people!
We're trying to implement automated scripts which search already submitted DeviantArt URLs for new revisions but even that isn't 100% accurate since some people simply don't use DeviantArt's own upload system due to size limits and DeviantArt isn't offering a good API to begin with.

We want to ask YOU, the various amazing resource creators out there, to help PonySFM to upload and maintain your own creations if possible!

Now we do understand that some simply don't want to register on a new site and that's okay, but even if just a bunch of you guys actually register and maintain their own resources here and open the ways for hundreds if not even thousands of other interested people starting with Source Filmmaker, it would already help a ton!
If you do decide to register and help us and already find your resource submitted to this site, please throw us an E-Mail at contact@ponysfm.com with a link to the resource, your PonySFM username and proof that it's actually you. This can either be a link to your DeviantArt profile with a short text in your bio like "PonySFM: username" or any other way you (and we) think is enough proof. We can then assign this resource to you so you can start editing and uploading new stuff to it!

Thanks for reading and thanks for helping (if you decided to do so)! Together we can create a platform that'll help a lot of people finding their way into the PonySFM community and create awesome animations, posters and more! <3

Published over 6 years ago

After working with the wonders of software within our fingertips, we are pleased to announce PonySFM Workshop, an app that supersedes our older, console-based mod manager. 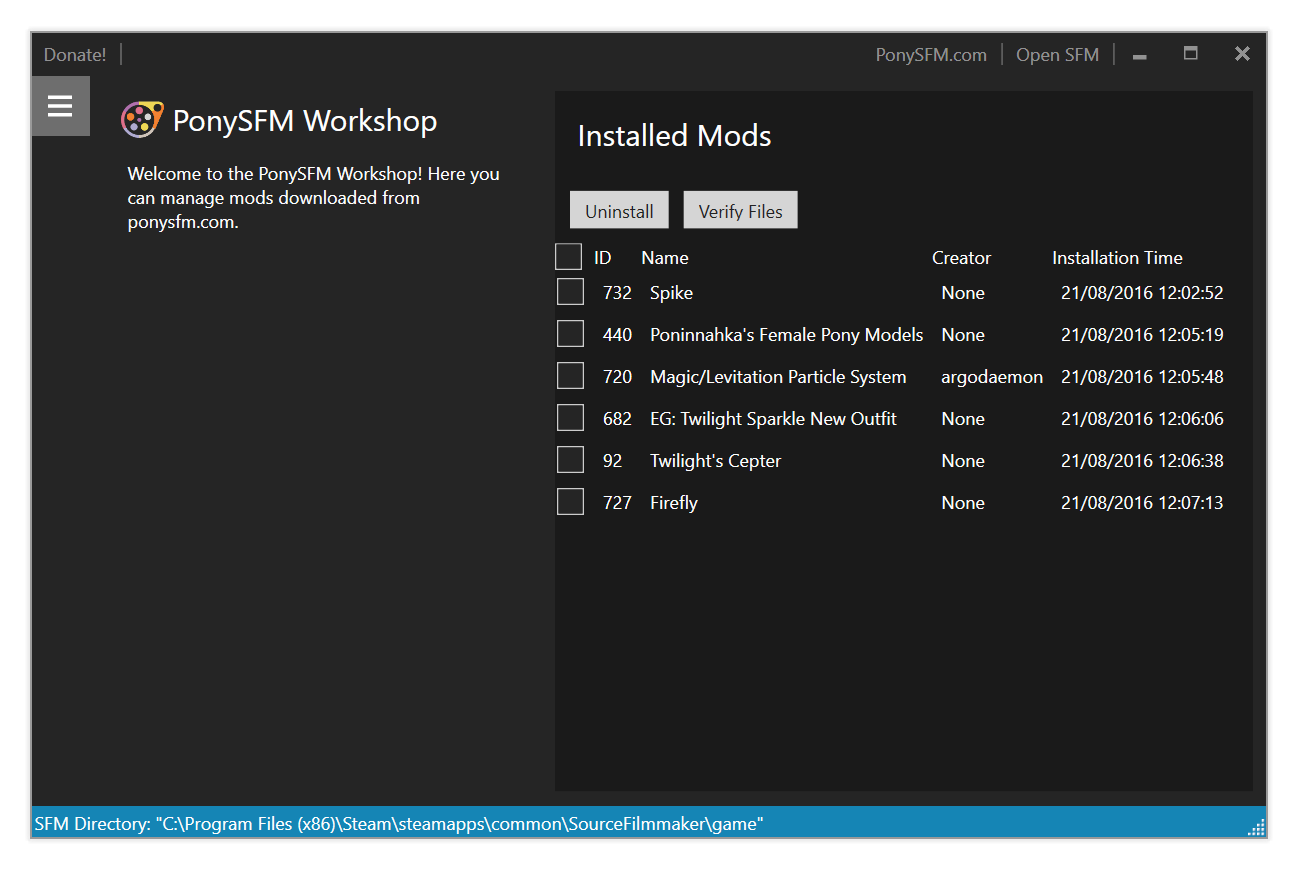 Tope beta phase is open to suggestions, bug reports and so on and we hope the app will please both the eye and the ease of use, featuring more up-to-date visuals found in today's newer applications.

Most credits go to Nuke928 for the foundation, the mechanics, and most of the User Interface. My contributions were also of grand aid, as I mostly help for the UI (a lot) and some other functionality within the app.

I wish you all a good week,

Server crashes, data loss and a one day downtime...

Published over 6 years ago

You might saw that our website was down for almost a whole day yesterday and we're sorry for that. Our server hoster had 3 vNode crashes over the last 2 weeks where the last one completely destroyed our server.

The MySQL database was damaged to a state where it wasn't able for us to recover it anymore, even accessing it just threw a ton of error messages. Most of the files, groups and permissions were broken or missing, the web server didn't even bother to start up correctly anymore other than displaying a crude error message when accessing the site. We were able to boot up the server to a state where we were able to retrieve the most important files still, but that was it. We tried to repair it, that however turned out to be impossible...

We had to reinstall our server completely from scratch. Luckily we had backups from the day before (we generate backups at 2 AM each day) so it wasn't as bad as I first thought it would be.


To prevent such a thing from happening again I'm currently thinking about starting a donation pool or something similar (maybe Patreon?) so we can get a second server for redundancy, right now I (EpicLPer) am paying everything out of my own pocket. But that's something I'll have to talk about with my team.

Anyways, sorry again for the downtime yesterday, I really hope that something like this won't happen again.

Also a huge thanks to Nuke928 for setting up the new server and getting it up and running in less than 2 hours, awesome!

Ever thought "Hey, I have some really nice ideas for this website!" but never knew where to send them?

You can now send us your very own, personal ideas on how to improve PonySFM!

As simple as that!

I think you get what I mean now.

We'll always be happy to hear what things you're thinking about.